Last summer while I was hiking in Kings Canyon National Park, I had much on my mind. Walking the trail—admiring the craggy, breathtaking views of granite and pine, listening and following the rush of cold streams and the calls, near and far, of birds, squirrels, and nameless others—there is much to inspire the composer. As a musician, sound is at the forefront of my awareness. But what about the immensity and awe—even terror—one may feel in these intimidating, yet intimate landscapes? Potential metaphors and meanings hide behind every cloud and tree, gust of wind, or mysterious chirp. Of course, it is up to us as composers to relate these experiences in our musical statements and aspirations. This can be a daunting task as we parse out the myriad cultural contexts and perspectives each of us brings to every piece of music and every excursion in the mountains. Informing ourselves about how other cultures draw upon the landscape in their music gives us new perspectives and helps us to clear the air of our usual conceptions. In this essay, I invite you on an adventure to another culture and another landscape.

Nature music: Seagulls at Chagatai Lake in south central Tuva. From Where Rivers and Mountains Sing: Sound, Music, and Nomadism in Tuva and Beyond.

“The spiritual nature of mountains and rivers is believed to be manifested not only through their physical appearance but through the sounds they produce…thus, the echo that results from singing in proximity to a cliff, and the interaction of a human voice with the gurgling of a brook or the swishing air currents of a strong wind may be imbued with spiritual power.”2Levin, T., & Huun-Huur-Tu. (1999). Tuva, among the spirits sound, music, and nature in Sakha and Tuva. (Smithsonian global sound for libraries). Washington, D.C.: Smithsonian Folkways. Pg. 3-4

The natural world constantly references a spiritual one mediated through sound, both literally and figuratively, as Levin continues:

“Living creatures, not less than inanimate places or landscapes, manifest spiritual power through sound, and for humans, the key to animating and assimilating this power is the imitation of sound.”

In the musical and spiritual ideoscape of the central Asian steppe, the forces of nature’s master-spirits affect everyday life. With just two million people spread over a vast expanse of over one million square miles, the nomadic life is often pitted against the elemental power of nature, early or late snow, rain and wind, testing the resilience and humility of humans. In this landscape, the gods can be charmed with music, and music performance become an act of reciprocity—returning to nature what has been borrowed. 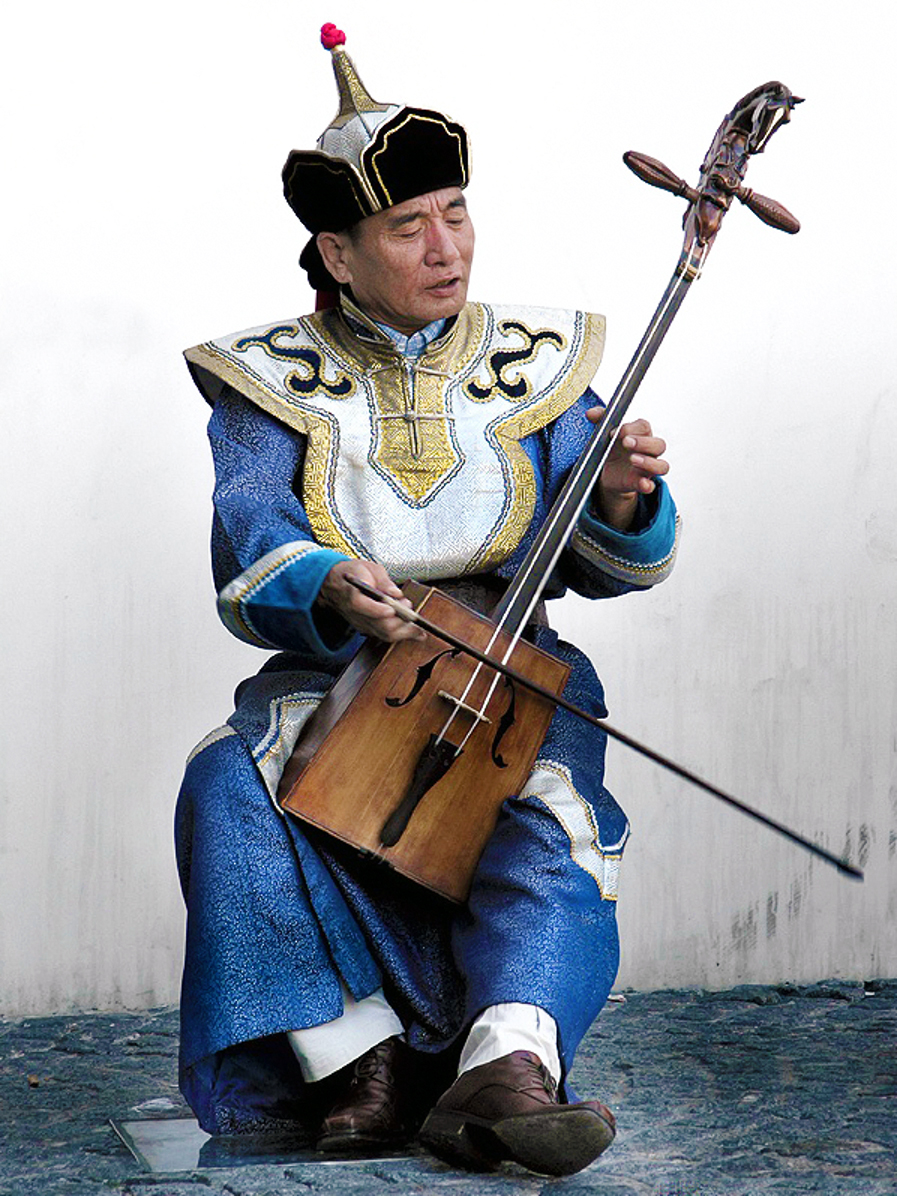 Example of urtin duu or “long song,” with Xoomei throat singing and horse head fiddle. From Mongolia – Living Music Of The Steppes

Sound and song exist along a continuum from iconic imitation of sound to ‘aestheticised’ imitation of natural sound to autonomous musical forms such as the Mongolian urtyn du or “long song,” a varied stylistic technique and song form. Some scholars have remarked the melodic contour of these songs, generally absent of conjunct movement, can be interpreted as ‘hill shaped’ with ascents and descents not unlike the topography the songs were performed in. Referring to a robust, extended form, making a subgroup of the style, Mongolians described it as “spacious,” “wide,” “long-lasting,” and “of great size.” Different melodic contours are associated with different environments. Long songs performed in mountain areas have descending contours; those performed in the steppe (looking up at the mountains) start low and ascend.3Pegg, C. (2001). Mongolian music, dance, & oral narrative : Performing diverse identities. Seattle: University of Washington Press. Pg. 106 These connections between mountains and melody reveal themselves on the surface of a complex relationship between nature and culture.

Mimetic exchange is central to the reciprocal relationship practiced by nomadic Mongolians and Tuvans, articulating in performance the linking of nature spirits, human beings, and other deities with the origins of songs, music, and instruments. Instrument making and subsequent performance are imbued with spiritual power and kinship relation. Images of the landscape are mapped in the contours of melodies and dances, the body used as a metaphoric landscape, imitating sounds and shapes of the environment.

In Western culture, the body may be considered a part of nature. When used in artistic performance, the body is subordinate to the remotest rituals and references aspects of culture over nature. Mongols, however, use metaphors of kinship among humans, performance, and nature. The inspiration and practice of long song, for example, requires a ritual embodiment of natural features and spiritual power. The folk traditions of long song, overtone singing, horse-head fiddle, and epic (song narration) all share with each other intrinsic connections between spirits and nature. The sounds produced by the tsuur (a rare instrument that amplifies overtones of the voice) imitate the sounds of wind, trees, animals, and water that resound through the mountains. As scholar Carole Pegg points out, this relation is not merely imitation but reciprocation to the spirits of the universe from which the materials were taken to make the instrument. These songs include titles such as “Altain Magtaal” (Praise-song of the Altai [Mountains]) and “Hangain Magtaal” (Praise-song of the Hangai [Mountains]).4Ibid. Pg. 99

Anatoli Kulaar, throat singing by stream. From Where Rivers and Mountains Sing: Sound, Music, and Nomadism in Tuva and Beyond.

One of the ways this sound making intersects with our own contemporary creative approaches is the Tuvan idea of boidus churumaly, a “sketch of nature.”5Levin, T., & Süzükei, Valentina. (2006). Where rivers and mountains sing: Sound, music, and nomadism in Tuva and beyond. Bloomington: Indiana University Press. Pg. 88 Tuvan sketches of nature are quite broad, the sound medium varying from throat singing, jaw harp, and whistling—yet all employ timbre as an expressive and core element. Sketches of nature typically convey steppe or grassland, steep mountains, or the taiga forest. Sounds produced in the resonant low chest are metaphorical of towering heights and peaks. While traveling in the mountains, the acoustic changes with your elevation. This, too, is reflected in the performance and creation of a nature sketch. Melodies evoking the sound of a mountain river flowing full and lively, according to one musician, should be a “large sound.”6Ibid. Pg. 90 Melodies are known to become like streams as they fall from on high. The rivers of the grassland steppes, open places, are soft and slow.

Music often functions as a translation of experience, and the Tuvan “sketch of nature” is an embodiment of this translation.

For contemporary composers, musicians, and eco-theorists seeking to embody landscape and nature in our own musical traditions, several parallels between our work and the Tuvan and Mongolian traditions become apparent. The creativity, inspiration, and purpose of both kinds of music are the natural results of time spent in place. Places where the human is dwarfed in scale, where we are somehow in awe and humbled. While in the great mountains and forest, deserts, tundras, and natural areas where we, as composers, may seek our respite and muse, we are brought into relation. We revel in the reminder that it is here, in the landscape, where our culture, our aspirations, and dreams are made and contained. It is transferring this sense of reverence, mediating it through sound and music and experience, that we find close company with these arguably ancient traditions. Music often functions as a translation of experience, and the Tuvan “sketch of nature” is an embodiment of this translation.

As children grow up with the rhythms of life—hunting in the taiga (boreal forest), riding in the grassland, or spending time in the mountains—there is sound. Those considered most talented will naturally bring this body of sonic knowledge to the forefront of their music. The natural environment is present both in a participatory and presentational realm. These traditions challenge us to consider a larger whole when thinking about the links we make between landscape and music. Where and how is an instrument made? What is the relationship between a culture and a natural environment? What is the relationship between spirit and nature, both individually and collectively? How is our contemporary musical life in reciprocity with the natural world? For those of us living in North America, these questions are all the more enticing. For our spirit-masters, those of the forests, the cold running rivers and streams, the tundra, the grasslands, prairies, and mountains—filled with similar plants and animals—are not too dissimilar. They are listening and singing. How will we respond?

Justin Ralls (justinralls.com) is a composer, conductor, and writer hailing from the Pacific Northwest. He is a member of the Landscape Music Composers Network.

This site uses Akismet to reduce spam. Learn how your comment data is processed.